participants of all skill levels a chance to be exposed to different kinds of traditional folk music and develop proficiency in those styles.  Each morning and afternoon there were classes taught by the featured musicians from all over the world in which they would focus on a particular song or style of playing.  In the evening those same musicians would perform in a small theater.

Every day after lunch was “Band Lab” which gave participants an opportunity to join up with one of the musicians, form a combo band, learn songs from the musicians, practice throughout the week, and then perform at the end of the week.  I chose to join a group led by a Trio from the Basque country, and with about 15 other students had a great time learning 5 songs and learning how to sing in the Basque language, which I had never heard of before. 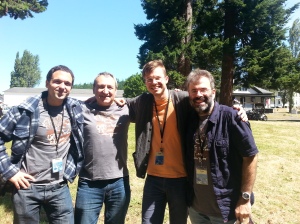 I wanted to go to all the classes and workshops, but due to my  inability to be in more than one place at one time, I tried to just take in a variety along the course of the week.  I went to classes for banjo, piano, mandolin, guitar, violin and more and learned a lot about techniques when playing traditional folk music.

The classes are open to anyone at any time, and people can participate as much or as little as they want, so even though I only had an acoustic guitar, I was able to check out quite a variety of classes without getting looks of disapproval from teachers.  The structure of the whole week is very relaxed, but full enough so you can participate all day if you want to, and that’s what I decided to do.  It was great to listen to, play with, and chat with musicians who know so much about the history of the music that they play.

Here are 5 things I learned during my week at Fiddletunes.

#2:  Songwriting is a process of borrowing (stealing?) from other songs/styles.

“Take part of a song you like, keep playing it, it turns into something else, you have a new song” – Joseba Tapia

#3:  Rhythm is based on organic sounds.

#4:  Happiness and Sadness are all part of good honest music.

“I play lots of sad and depressing songs.  I think that’s why I’m so happy” – Riley Baugus

#5:  The Amazing Slowdowner for PC or MAC

(Software and App for slowing down fast songs to be able to hear individual notes and learn them slowly.)